On March 27th, Apple took its annual spring event out of California and urged attendees to ‘take a field trip’ to Lane Tech College Prep High School in Chicago. The venue was fitting, considering Apple’s promise to focus its newest products towards the education market. Education has long been a linchpin in Apple’s strategy and this event was another step in their quest to try and reassert themselves as a major player in an industry that thus far has been dominated by Google and Microsoft.

Of course, right now, the education market is Google’s to lose. Google operating systems — mainly Chrome OS, which powers Chromebooks — have led classroom notebook and tablet shipments since 2014. There has been little change since then, with reports from 2017 stating that Google control around 60% of the market with their affordable tech. To put this into context, Microsoft and Apple devices accounted for only a 20% market share in 2017.

Why the strong lead? That’s easy. Schools with tight budgets can pick up a dirt-cheap Chromebook for $100-$150 less than an iPad, and it’s easy to see how that’s an appealing proposition for the budgeteers! Why are they so much cheaper? Well, like Android, the heart of the Chrome operating systems approach is an embrace of third-party manufacturers – which is good news for a bursar.

So how are Apple trying to ‘turn the tide’?

The main focus of the event was the “affordable” iPad with stylus support. We’ve used quotation marks because the cost is still $299 for schools, but $329 for everyone else — the same price as iPad’s 9.7-inch tablet announced last spring (we’ll let you decide if that’s affordable). But alas, this new and improved iPad will finally work with the $99 Apple Pencil ($89 for students/teachers), which was previously only supported by the iPad Pro. Combined with the pressure feature and a high-resolution touch system, the Pencil will allow students and teachers to create smart annotations directly in documents.

In addition, the new iPad will have an 8-megapixel camera with 10 hours battery life and weigh just 1 pound. A retina screen that will create possibilities for student-focus augmented-reality experiences, like virtually dissecting a frog, which Apple claims will become a key part of the education experience. It will also use an A10 chip which makes the iPad more powerful than most laptops and essentially every Chromebook. 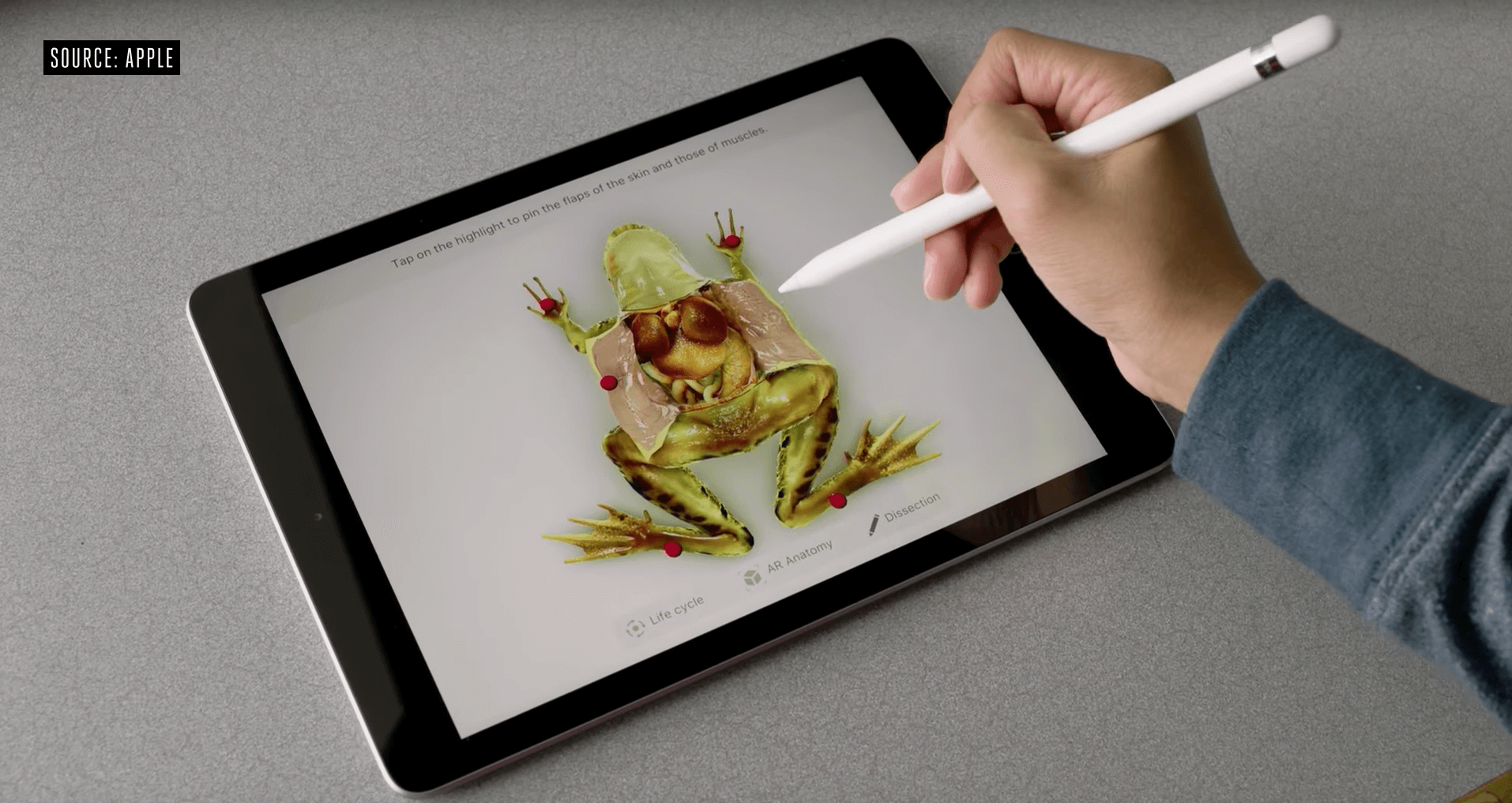 Besides the hardware releases, Apple also announced the iWork updates which lets teachers and students build books together by adding pictures, handwritten notes, and hand-drawn illustrations. As well as this, Numbers can now be used to create lab reports, and clips will get new kid-friendly filters to encourage them to express themselves digitally. The most useful update appears to be the ability for teachers to mark up documents on Pages with the apple pencil similar to how they might mark pupils work on paper.

A new app named ‘Schoolwork’ was likened to writing an email by Apple as it gives teachers the ability to manage a classroom digitally by handing out digital assignments to students such as homework and activities. In order to accommodate the amount of document attachments expected Apple will update student iCloud accounts to include 200GB of storage by default which seems particularly useful.

Whether they have done enough to give Google some solid competition, you have to admire that Apple’s have done their research. They’re pushing students to create digitally from a young age, something that’s clearly of interest to a demographic that grew up on YouTube, Snapchat, and Instagram as their go to sources of web entertainment. It is part of a new initiative called ‘Everyone can create’ with the curriculum focusing on four main areas: music, video, photography and drawing using tools like Clips and GarageBand.

So have Apple done enough? One thing’s for sure – we’re very interested to see how Apple will continue to try and knock ‘Teacher’s Pet’ Google off the top spot.

Want to see for yourself?

Design & brand tips for your business materials Make your business marketing look professional. Is your school website set up for international admissions? Website builders – the Pros, the Cons and when to engage an agency