So how did the evolution of Web3 come about?

First there was Web1, the ‘read-only web’, consisting of mostly static websites owned by companies, and unlike the modern day, involved no interaction between users.

There was also very little by way of individuals producing content.

Instead of companies just serving content to its users, they also provided platforms where their users could interact and engage with their brand, thus producing user-generated content. 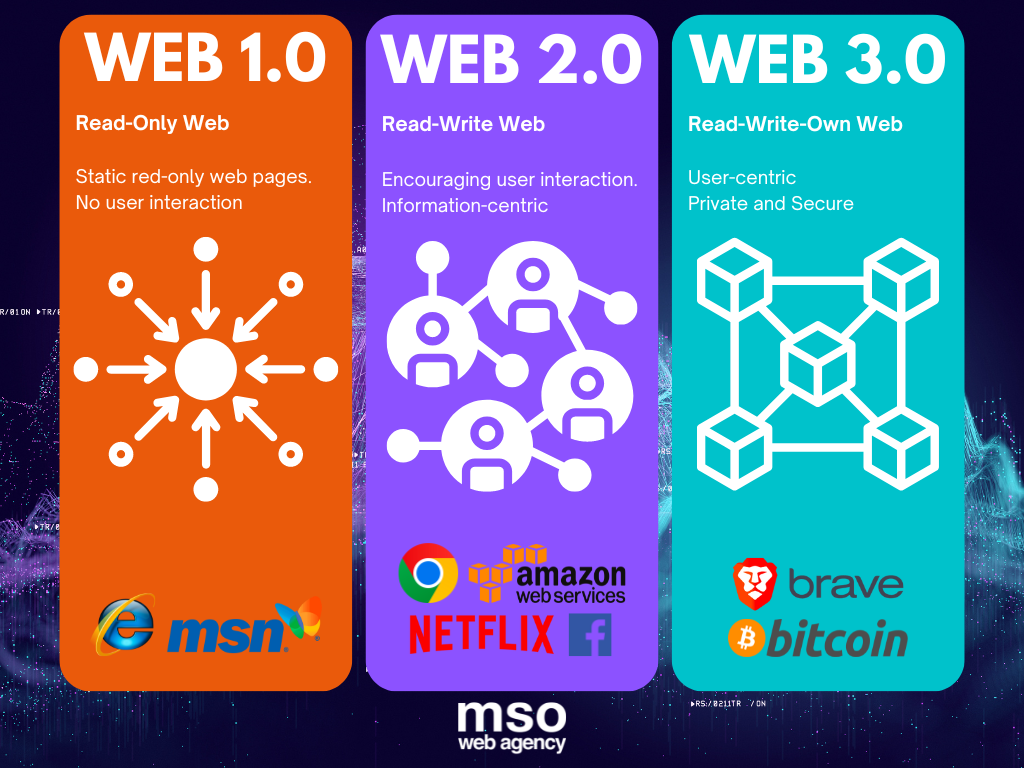 And now peeking through the curtain is Web3, the ‘read, write, own web’.

But what exactly sets Web3 apart from its predecessors?

This blog post looks to explain what it is, its pros and cons, and offers our perspective on the up-and-coming iteration of the world wide web.

So, what exactly is Web3?

The idea of Web3 was coined by Gavin Wood, co-founder of Ethereum, a technology for building apps, hosting assets, transacting and communicating on the web, without being controlled by a central authority.

Gavin felt that for users of the web, there was too much of a reliance on a handful or private companies to act in the public’s best interests concerning the plethora of personal information circulating the web at any given time.

Thus the foundations of Web3 were born.

The core ideas are;

So, what are the advantages of Web3?

So now we know a bit more about Web3, but what exactly are the benefits of this new technology?

As the end user, you will retain overall control over your online data. Decentralised data and advanced data encryption will mean that organisations such as Google or Apple, who may have been able to collect and benefit from the use of your data in the past, won’t be able to do so.

This decentralisation also means that you can count on having a more streamlined and direct communication with service-providers without passing through third-party, fee-charging middlemen. This gives you more privacy and anonymity by default.

As the user, choosing who has access to your data means that you will benefit from enhanced personalisation. Ads will be more targeted, relevant and personal and with Web3 utilising artificial intelligence and machine-learning to offer a truly personalised experience.

And what are the drawbacks of Web3?

As with the emergence of any new technology, there’s bound to be some teething issues, but what can we expect?

Ultimately, Web3 will require your device to be compatible with the technology, meaning that your device’s features and characteristics will need to be extended to make the technology reachable to you.

New technology can also be quite intimidating for some users. Whether a self-confessed technophobe or infrequent web user, Web3’s complicated functionality will mean that there will be people hesitant to use it.

Older sites will become obsolete as Web1 websites will be incapable of competing with the new technologies and support the updates necessary. Some organisations therefore will need to invest financially, or risk losing out to their more technically capable counterparts.

And lastly, whilst Web3 applications are largely more secure and resilient to cyber attacks, programs that run on Blockchain contain security vulnerabilities that can be exploited by hackers. As Web3 is largely pseudonymous in nature, it can open up a lot more challenges when trying to identify and apprehend cyber criminals.

So, what is our opinion?

Ultimately, the emergence of Web3 into the web world is inevitable, but still very much a work in progress.

Whilst examples of Web3 applications are out there such as Apple’s Siri and Wolfram Alpha, there’s a long way to go in educating the masses about the benefits of this new evolution of the web.

Web3 is important for the future of the web.

It’s a system for users, designed by users, giving us back control of our personal data and providing a seamless, customised web experience.

Will these ‘digital interactions’ with a brand ever negate the need for those ‘face-to-face’ experiences? … No.

But will it enhance the experiences that users have online in lieu of an in-person experience? … The bottom line is yes.

Providing a user-centric and unique digital interaction instead of barraging web users with a plethora of irrelevant and otherwise annoying ads, makes for a better browsing life.

And personally, we’re happy to see that artificial intelligence is shaping the technology world as considering its capabilities, it has been largely under-utilised as a tool to make user-interactions with brands as optimal as they can be.

We even touched upon this in our blog, How AI could be utilised in web development.

But, are we ready?

The answer here is a resounding no.

Whilst the benefits of Web3 are vast, providing users with the platforms to be able to access this technology and the education to be able to do so without fear and apprehension, is massively needed.

Ultimately, there’s a long way to go before we see Web3 fully released upon the world and adopted by the masses globally. Web3 is still evolving and being defined with many sources surmising that we still have 5-10 years to wait before it fully emerges.

One thing is for sure, we’ll certainly be keeping a close eye on its journey into the digital world – whenever that may be.