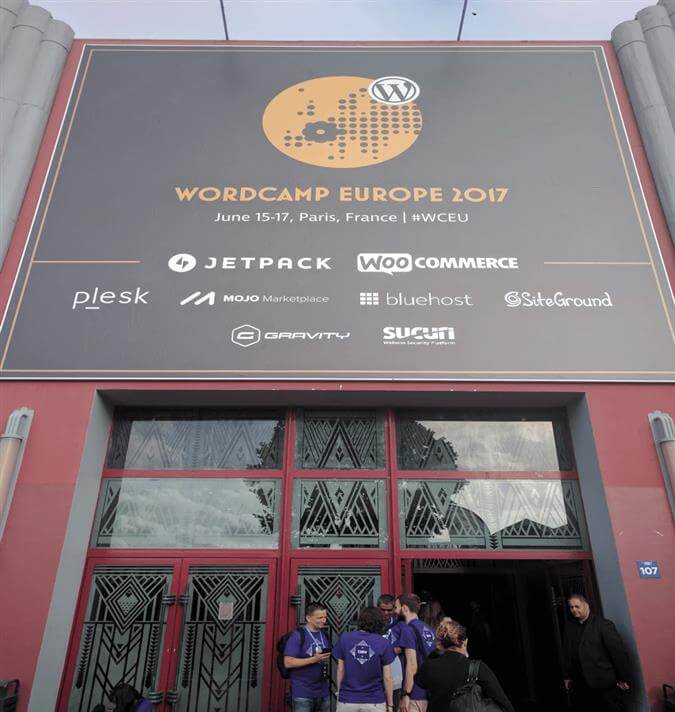 The conference is a community organised event with prices kept very low to make it as inclusive as possible for everyone. For only €40, it offered attendees 43 presentations, 14 sponsor workshops and 13 “tribe” meetups, over two days, as well as breakfast, lunch and snacks and drinks throughout the day. To keep with the WordCamp ethos of inclusiveness the organisers arrange for live captioning of all presentations in both English and French as well as real-time audio translation. As a community organised event it had 221 volunteers, who used Slack to communicate behind the scenes, to keep everything running smoothly.

The “main event” during the two days was a Q&A session with Matt Mullenweg, co-founder for the WordPress open source project and now CEO of Automattic the company behind the WordPress hosting service wordpress.com as well as a range of very popular WordPress plugins such as JetPack and WooCommerce. The session was lead by Om Malik, a partner at True Ventures who are an investor in Automattic. Matt showed off a demo of the new Gutenberg editor as well as announcing that it was available as a plugin via wordpress.org for testing purposes. Matt then took some questions from the floor which mainly focused on the “open web”. A video of the full Q&A session can be seen below:

The other presentations at the conference covered both technical and non-technical topics, so there was something for every sort of WordPress user, as well as the “tribe” meetup networking sessions, which allowed different users to meet and network with other similar WordPress users.

Overall, it is one of the best organised and smoothly run conferences I’ve been lucky enough to attend and for such a low entry price it represented extremely good value for money.